Interest Rates: The business news is full of stories about interest rates, how they affect the stock market and how the Federal Reserve Bank might be raising rates or waiting to raise rates. The market might plummet or shoot up on a day where there is an unexpected change in rates or the hint of a future change in rates. You might think you know what an interest rate is, after all you have a savings account, right? You pay interest on your mortgage or student loan, right? But interest rates are a lot more complicated than that and in this post I will try to demystify them and explain what interest rates really are and why they are important.

What is an interest rate?

Remember the old saying: “Neither a borrower nor a lender be” from Shakespeare’s Hamlet? Well, everyone who has any money at all who is not stuffing the money into a mattress is a lender. A bank account is actually a loan you are making to the bank, who in turn lends out that money to others. The bank pays you some interest (sometimes) on your account and then lends out the money to Joe down the street so he can buy a home. Joe has to pay interest on his loan and the bank makes money because they can charge higher amounts when they loan out money than they have to pay you for your money in the bank. The amount they pay you is an interest rate and the amount they receive when they loan money out is also an interest rate.

These rates area actually different because these two loans are different. When you are loaning your money to the bank in a savings account, this is a very short-term loan since you can take your money out at your discretion at any time. On the other hand, when the bank loans to Joe in the form of a 30-year mortgage, this is a long-term rate because the loan is for a term of 30 years. Most of the time long-term rates are higher than short-term rates because the risk of inflation means that the dollars Joe pays the bank over 30 years are worth less in buying power than the dollars being lent out today. A higher long-term interest rate means that the bank can make up for inflation.

Why are interest rates what they are?

To understand interest rates, you need to understand two things: Inflation, and the Federal Reserve Bank (or European Central Bank, or other national central banks).

Inflation is simply the rate of increase of prices in the economy. We typically measure inflation using the Consumer Price Index (CPI) which measures increases in a typical basket of goods which consumers buy. The CPI includes housing, medical, and education costs as well as the normal things everyone buys such as food and clothing.

Look at the red line, which is the rate of changes in consumer prices. You can see that most of the time this is above zero, showing that most of the time prices increase. But you should also notice that it might have just dipped below zero in 2008 and is again in 2015 close to zero. So is inflation good or bad? Well, a lot of inflation is bad (like we had in the 70s) because it erodes the value of money in people’s pockets. Your money is worth less the longer you hold on to it. Deflation, when the red line drops below zero is also bad since no one wants to spend any money because next week the price will be lower. Valuations of housing and companies also drop with the CPI. So its actually just having a little bit of inflation, maybe 2% which is the best. Prices go up just a little every year. Your money holds its value and you are willing to spend because you know prices might go up. The value of your home and paycheck will go up too.

So what does inflation have to do with interest rates? When investors loan money out long-term, they expect to make a little money. How much? Usually just a little over the rate of inflation. So if the market expects that over the next 10 years, inflation is likely to be about 1.5%, then a risk-free loan would have an interest rate just a tiny bit above 1.5%. Longer loans are more sensitive to inflation, so they might have a higher rate. This is called the yield curve. The longer end of the yield curve has everything to do with inflation expectations. 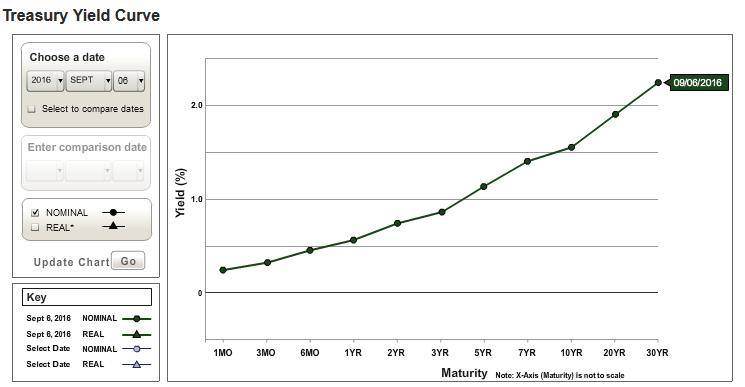 So if you are wondering why long-term rates are so low right now, its because the market’s inflation expectations are also very low now.

The Federal Reserve Bank is the United State’s Central Bank. The bank, known as the Fed, has a number of functions in regulating banks and the economy. One of the most important functions is to regulate monetary policy to promote stable inflation and low unemployment. The exact methods used are beyond this discussion, but the primary tool that the Fed has is control over short-term interest rates. The Fed Open Market Policy Committee meets monthly and decides on monetary policy to control short-term interest rates. Right now, the Fed’s Federal Funds rate is set to 0.5%. This is the rate banks may charge other banks to loan them money. It acts as a de facto  setting of short-term loan rates for banks.

So why does the Fed set short-term rates? Its because they are trying to use the rates to stimulate or cool the economy. Low rates stimulate the economy (possibly increasing inflation in the long run) and higher rates cool the economy down (possibly decreasing inflation in the long run). The exact mechanism has to do with the multiplier effect and is beyond this discussion. Suffice it to say that when the Fed raises rates it is trying to either stimulate the economy less or actually cool the economy. If the economy cools, then what happens to spending and in turn what happens to corporate profits? They go down or at least increase less and then the stock market might drop because it is priced on expectations for increases in profits. So that’s why the stock market moves so much with interest rates. Increasing rates means cooling economy. Decreasing rates means heating economy.

Circling Back: When will I Earn More on My CDs?

CDs, which are long-term savings accounts which are insured by the FDIC are risk-free investments and therefore tend to have the lowest rates. So the interest rates for short-term CDs might go up when the Fed decides to raise rates (although you always have to shop around for the best rates). Rates for longer term CDs (10 years+) are set via the inflation expectations of the market and frankly at the moment inflation expectations are still very low. Typically wage inflation, which drives the overall inflation rate, tends to kick in when the economy reaches full employment. The unemployment rate is now under 5% and if we are not at full employment, we are pretty close. So you would expect wage inflation to start to kick-in, but there still seems to be enough workers who had given up on finding a job (and thus not counted in the unemployment rate) to keep wage inflation at bay. Still, I would expect it to start real soon now.

The Fed has basically said that the two factors they are looking at before raising rates are the unemployment rate and the Core PCE inflation rate (which tracks but differs slightly from the CPI rate I wrote about above).

The graph above is the Core PCE rate of change from the previous year. The Fed wants to target this rate at 2% and they are saying that it will hit 2% soon because they expect wage inflation. And yet after an increase from January, the Core PCE rate doesn’t seem to want to hit 2%. The Fed has been rattling their sabres (talking about increasing rates), but it’s the lackluster PCE that is causing them to hold off.

I don’t have a crystal ball and as you can see this stuff is complex. I think the risk of inflation is still quite small and because of this and other risks to the economy (Election, ISIS, Brexit, no productivity growth, etc.), I don’t think rates will go up fast. I think the Fed will wait and see until after the election, so it is possible rates will rise once in December with another .25% rise. After that, if the economy continues to chug along or even improves faster, then I would expect another .25% rise sometime in 2017. So my personal opinion is that the federal funds rate will not rise above 1% by the end of 2017. Long term rates will also not rise much more than .5% but there is definite risk with emerging market bonds, so riskier bonds could end up with higher rates. Let’s see if I’m right!

Any questions, I would be happy to discuss this with you. My email address is on my website at: https://cereusfinancial.com.

PrevPreviousHow severe is student loan debt condition in our nation
NextDoes it make sense to pay no taxes?Next